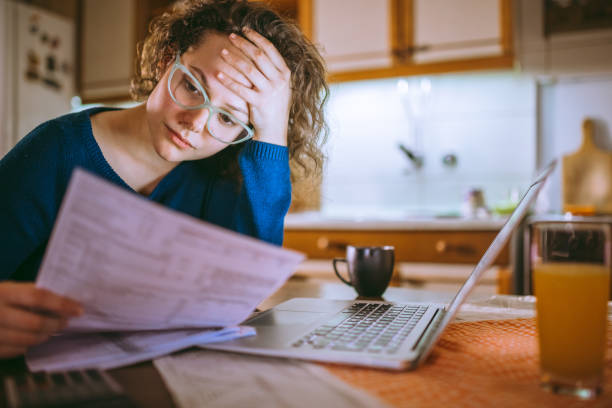 The COVID virus has gone through cycles of apparent decrease followed by new and persistent variations in the last few years, resulting in a deadly pandemic, a tense Presidential election, and a succession of false hopes and losses.

As the health crisis enters its third year, Americans are facing yet another psychological attack in the form of financial stress.

Understanding the impact of financial stress on your health and actively pursuing measures to alleviate that stress may be beneficial.

The Year 2022 Will Be Tough for Financial Stress

2022 is already shaping up to be a difficult year for financial stress just a few months into the year.

High inflation, such as most of today’s Americans have never experienced, is making it impossible to make ends meet. Higher costs appear especially cruel at a time when several forms of emergency government assistance are about to expire.

To help Americans cope with the financial effects of the pandemic, the federal government provided more generous unemployment benefits, stimulus cheques, and extended tax credits for earned income and parents.

In addition, payments on federally backed student loans have been suspended, and evictions have been halted.

These measures aided the economy as a whole and individual families in coping with the pandemic’s initial financial strains. However, all direct financial benefits have now expired, the eviction suspension has been lifted by the Supreme Court, and student loan payments will resume in September.

This could all be considered as a return to normal, except that, at the same time that those forms of aid are being phased out, inflation is making cost-of-living rises everything but normal.

Making ends meet is a weekly struggle for millions of Americans. There’s not much of a buffer between being able to pay your bills and running out of money.

When inflation rises quickly, that cushion might be swiftly depleted. For some, this means taking out loans just to pay their bills. It may mean defaulting on debt obligations for people who are already in debt.

The Personal Savings Rate is one indicator of people’s financial buffer between making ends meet and going into debt. This is the amount of money saved by households as a percentage of their total income. Over the last nine months, the cushion of Personal Savings Rates has been thinner and thinner as inflation has risen. See the graphs below.

Furthermore, while default rates reflect payments that are months late, many more Americans are afraid about missing a payment in the near future. According to the Federal Reserve Bank of New York’s Consumer Expectations Survey, 11.1 percent of Americans with debt believe they will be late with a payment in the next three months.

It’s possible that things will get worse. Not only are the above trends in the wrong direction, but they also fail to account for the looming threat of student loan debt.

Because to the COVID-19 outbreak, federal student loan repayments have been halted. This has momentarily obscured the issue of how many borrowers were already drowning in student loan debt prior to the pandemic.

Repayments on such loans are set to commence after August 31st of this year. The Consumer Financial Protection Bureau (CFPB) looked into student loan borrowers’ credit histories to see how many were at risk of defaulting on their payments when they were due again.

The Consumer Financial Protection Bureau found five risk markers that suggested a student loan borrower could have trouble resuming payments. According to their estimates, 15 million borrowers have at least one risk factor, and 5 million have at least two.

The personal finance situation in 2022 indicates that a growing number of people are already struggling to make ends meet, and many more have reason to be concerned about their ability to pay their financial responsibilities in the near future.

This isn’t just a matter of cash and cents. Debt and health problems have been linked in several scholarly research. Some instances are as follows:

expenses, you’re certainly well aware that financial stress has Of course, if you’ve ever been deeply in debt or struggled to pay your physical and mental health implications.

Use Mental Health Awareness Month to inspire you to take steps to alleviate your stress.

Take Charge of Your Money Situation

A sense of powerlessness is one of the symptoms of financial stress. It’s the feeling that your debts and bills have gotten the best of you, and there’s no way to catch up.

Getting organised is a good approach to combat feelings of helplessness. Make a strategy for dealing with your financial issues. Rather of allowing your finances to deteriorate, take steps to improve them. Here are some measures you may take to begin taking charge of your finances:

Sort your debts by interest rate, from highest to lowest, and look for ways to pay off the most expensive loans first.

Look considering refinancing or consolidating high-interest debt into reduced-interest debt, or rearranging the debt to lessen your monthly payments.

Consider whether or not debt counselling is required.

There is no quick fix for debt difficulties. You may better your financial circumstances and eventually rise above it with time, patience, and willpower.

Starting that process can seem empowering from a mental health standpoint. Knowing there is a way out and having some control over the answer can help you have a more positive attitude on life.

Of course, if you require psychological assistance, financial advice will not suffice. Regardless of whether you focus entirely on repairing your money or combine it with mental health therapy, addressing the origins of your financial worry is a positive step.